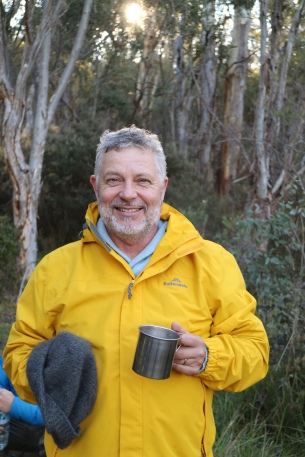 I know what you’re thinking, it sounds like the first line of a poem or something right? Sorry to disappoint you. On day three of my recent five-day trek, we were at a little public camping ground and had just finished stringing up our little nylon covers between two sticks when up the track came a woman walking by herself clearly weighed down by her backpack, almost shuffling her way to the other end of the clearing. By this stage of our trek I was struggling to stand up straight myself so I could empathise immediately with her lethargy.
Day three for me had been another day of trekking uphill and down, including a bit of abseiling and some canyoning so my body was aching in places I had long forgotten I owned. It had been three days since my last shower, my armpits were noticeably closer to my nose than I cared to consider and I had been reminded about my age relative to some others on this trek a few times over the course of the day, so I was feeling every day of my 57 years.
The woman dutifully set up her little dome tent as the evening chill took hold, and came over to the group to have a chat. It was late in the day, perhaps too late to call it dusk so it was tough to get a handle on her age, but perhaps she was in her late fifties. Her hair was messed up, her face heavily lined and in her trekking gear, age is a difficult commodity to gauge.

When we asked her where she was walking to, we were impressed to hear she was heading to the same place we were headed. A thirteen km uphill trek to the top of a mountain. She was going to start out a fair bit later than we intended, but there was some sense of camaraderie in all of us heading in the same direction. It was the answer to the next two questions that I am still shaking my head at.

Question. And where have you walked from?
Answer. This walk started in Moe, so its 630 kms in total, tomorrow is the second last day.
Question. What is your motivation for doing a walk like that?
Answer. I love to travel and I have no money so this is a great way to see things. When I get to Canberra I’m going to ride my bike to Brisbane, I think I will fly back to Port Douglas from there.

Okay folks, who among you is feeling a little lazy right now?

One thought on “Met a woman along a track one day”